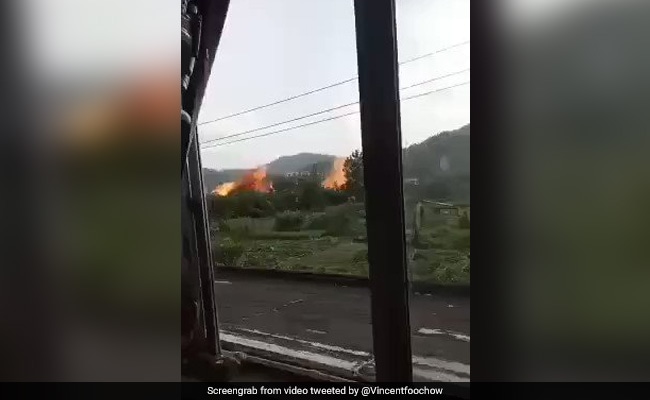 In one clip, a large piece of debris is seen flying into the air before crashing

At least 10 people were killed and more than a hundred injured after an oil tanker truck exploded on a highway in China on Saturday, state media said.

The force of the blast caused nearby homes and factories to collapse, the government said on social media, and sent huge clouds of black smoke billowing into the air as flames engulfed several cars.

Dramatic video footage of the accident near Wenling city in the eastern province of Zhejiang published by state media showed a huge ball of fire shooting into the air as people screamed.

In one clip, a large piece of debris is seen flying into the air before crashing onto some nearby buildings.

Another video shows the remains of the tanker and several truck tyres smashed into a building which had been reduced to rubble.

The number of deaths had reached 10 by Saturday evening with another 117 injured taken to hospital, state broadcaster CCTV said.

Multiple highway exits were closed, according to local police statements.

Deadly road accidents are common in China, where traffic regulations are often violated or not enforced.

According to authorities 58,000 people were killed in accidents across the country in 2015 alone, the last available figures.

Violations of traffic laws were blamed for nearly 90 percent of accidents that caused deaths or injuries that year.

Last year at least 36 people died and 36 others were injured in eastern China when a packed coach with a flat tyre collided with a truck.

(This story has not been edited by NDTV staff and is auto-generated from a syndicated feed.)

8 important things you should consider when you’re choosing…

Dubey was taken in for questioning as a teenager in early 2000s, after beating up some people in his village.

The furniture store Wayfair is trafficking children via overpriced items. Origin In July 2020, some social media users accused the

Netflix has released so many new shows and movies during the lockdown. People wanted something to keep them busy and

Thailand has 23 species of the horseshoe bat, but there hasn’t been a probe before.(Representational) Bangkok: Researchers in Thailand began